Wyatt Binkley is no stranger to the International Lineman’s Rodeo, held annually in Overland Park, Kansas, since 1984.

Back in 2015, he was on hand to see his father, Jim Binkley, compete. Since then, Wyatt has been attending regularly with Jim Binkley, a superintendent for Scottsburg Municipal, serving on the International Lineman Hall of Fame’s board of directors.

But in 2022, Wyatt wasn’t on hand to watch someone else or just tag along to see the show. He was competing for himself.

“It’s always been a dream of mine to compete there,” Wyatt Binkley said. “I saw the opportunity to go, so I jumped on it and highly recommend it to anyone.”

For Binkley and many others, the rodeo is about more than the competition.

“There’s the camaraderie of meeting all the guys,” he said. “There’s a trade show before the rodeo, so you see new tools and equipment, get an insider look at all of them. There’s also a safety seminar during the trade show, so there’s a lot of learning.

“It’s like the statewide rodeo times 1,000. You get to meet a lot of new people from all over the country and even Canada, talk about how they do stuff and how we do stuff. You find a new trick, a new vendor with a new tool – there’s always something.”

Back in August, the Indiana Electric Cooperatives Lineman Rodeo provided Binkley with some practice for the international event.

“That was a good little warmup,” he said. “I try to climb at least once a month but having that rodeo helped me get back in the flow, get with my tools and get comfortable.”

It also reminded him of what he’d seen in previous trips to Kansas.

“If you watch the professional teams, you can tell they’ve practiced forever and are fluid in everything,” Binkley said. “They all know their next move and know where their partner is. They have great communication.

“When we practiced at Clark County for the statewide rodeo, I told my team we needed to talk as a major part of it, something I learned from going to nationals.” 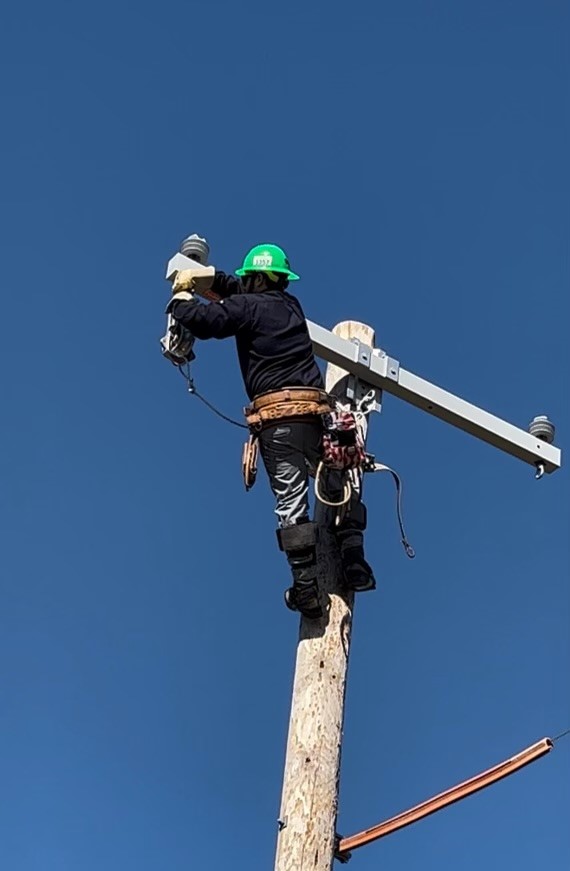 On this trip, Binkley learned not only from watching but from doing. He competed in the pole climb, written test, hurtman rescue and a pair of mystery events – knot-tying and Armor Rods, a transmission line accessory. The competition took place in Bonner Springs, home of the National Agricultural Center and Hall of Fame, about 30 minutes north of the Overland Park Convention Center where the trade show and awards banquet is held.

“I like the hurtman rescue,” said Binkley, who competed with IBEW Local 1393. “It’s an event everyone knows, it’s fair and is set up the same every time. I also like events where you’re tying in wire and doing stuff on the pole.”

He had the assistance of fellow Clark County REMC apprentice Dakota Evans, who served as Binkley’s helper preparing the tools for each event. Evans also competed in the statewide rodeo.

What they both learned is that the lineman rodeo isn’t just about doing stuff fast but doing it well.

“If you have sloppy work, you get a deduction,” Binkley explained. “Time comes into play because they have a mean time – a set time they expect you to get it done in and if you go over that you get another deduction. It’s not all about speed, but they don’t want you to be slow. Be efficient and be safe. If you do it safely with no deductions, then it comes down to the best time.”

With one year under his belt, Binkley hopes to be back for more.

“I’m going to sign up for it every year they have it and do my best,” he said.