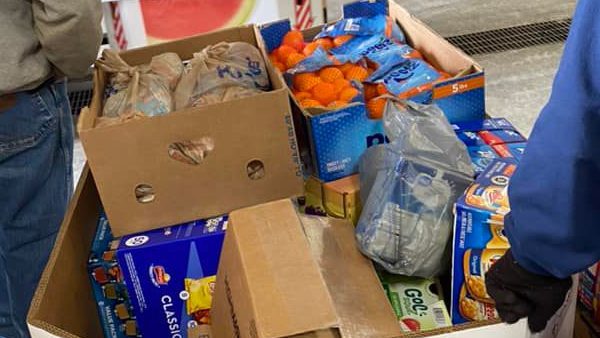 Hoosier’s Harding side by side with tornado victims

For Hoosier Energy’s Chad Harding, side-by-side is a way of life.

That goes for his hobby, riding side-by-side utility vehicles and serving as one of four administrators for the 6,400-plus members of the Southern Indiana SxS Facebook group.

But the term also fits that group’s mentality when it comes to adversity, opting to ride with others through their hardships.

The latest example came in mid-December. It was the final day of the SxS group’s Christmas food and toy drive, an occasion normally marked by a ride through Greene County by 60-70 participants with special permission from law enforcement to drop off the goodies.

But on Dec. 11, 2021, everyone woke up to the news of the devastation in western Kentucky from overnight tornadoes. It hit extra close to home for the side-by-side members.

One of our favorite places to ride is just outside the Beaver Dam area near Mammoth Cave, Blue Holler (Offroad Park),” said Harding, who is in his eighth year as a temp employee in facility maintenance/shipping and receiving. “Several friends and even members of our group are in that area of Kentucky, so part of our feedback was that we could help our members out as well as their neighbors.

“I know one of the friends I’ve met down there was just 10 minutes from all the damage. He had friends and family that lost everything, while he just had some sticks down in his yard.”

The group gathered at their final pickup location, Fowler’s Pumpkin Patch on the Greene-Monroe County line. They all agreed to take the remaining physical and monetary donations from Fowler’s as aid to the Kentucky victims.

“Everybody jumped all over it – it was unanimous,” Harding said. “Even the food banks and the toy distributors said, ‘You can take stuff off the truck, if you want.’

And once they did, they came up with a plan to “Pack The Trailers” the following Saturday with donations. Two 28-foot trailers, a 24-foot trailer and a 22-foot trailer sat in the parking lots of Sam’s Club and Wal-Mart in Bloomington on Dec. 18.

The buildup included a GoFundMe page, as well as Venmo and Paypal accounts to generate monetary donations. And Harding called on his co-worker at Hoosier Energy, communications coordinator for media and public relations Curt Durnil, to help spread the word both via social media and during his regular morning appearances on a pair of Bloomington radio stations.

“The morning radio hosts and I mentioned the event all throughout the week,” Durnil said. “I noticed people reacting to it on our social media pages with likes and comments. We were able to reach close to 1,000 folks that way alone.”

Befitting the pandemic era, it was the first time for the two Hoosier Energy employees to meet.

“I still have not met Chad in person, and he is one of the hundreds of my Hoosier co-workers I’ve only met online, by phone or text,” Durnil said. “But I can tell you that Chad is a go-getter. He’s one of those folks who sees a good cause and wants to attack it head-on.”

Harding also got a head start with a little over $1,300 collected at Fowler’s Pumpkin Patch, a donation of $2,600 from Bland’s Towing, and over $1,000 more via mobile payment services plus. Other businesses such as Van Horn Tint, Electric Services, Bobcat of Ellettsville and Master Rental also chipped in to help provide signs, fliers and equipment for loading and unloading as well as donations. A flatbed trailer with seven pallets of bottled water was also in hand before the December 18 fundraiser began, and local radio station Spirit 95.1 FM did a live broadcast from the Wal-Mart parking lot.

“People were coming from all directions,” Harding said. “They were coming up to the radio guy and handing him money. He’d say, ‘Hey, somebody just gave another hundred.’

One Wal-Mart employee got off his early shift and was starting to walk home when he saw the sign in the parking lot.

“He said, ‘I didn’t even know you guys were doing this,’” Harding recalled. “He dug in his pocket, pulled out six dollars and said, ‘I can go get more.’ I told him, ‘Nah, six dollars is great.’

“This guy took everything in his pocket and gave it. That just shows the big heart this community has.”

Designated shoppers put all the money to use, no matter how big or small, purchasing big and tall clothes at Rural King, fresh fruit from Sam’s Club and whatever else was on a list provided by churches in western Kentucky, such as sleeping bags, toys, coats and shoes.

“We also had people showing up with a full SUV packed with stuff to donate,” Harding said.

That included one local pediatrician showing up with an SUV full of soy baby formula, one of the biggest needs. And Side-by-Side Crossroads, a group from Indianapolis sent down a truckful of supplies to donate.

When all was said and done, there were nearly two full 53-foot semi-trailers worth of donations headed to Kentucky via Kent Booe Trucking in Clay City with local churches providing a little more than another trailer’s worth.

After spending Saturday collecting donations, Harding and the side-by-side group spent Sunday taking stuff off the small trailers and putting it in the big trailers.

By 1 o’clock Monday afternoon, the trucks were unloading where supplies were needed most – a few in Dawson Springs but most went to the Central City and Earlington areas, including a vacant department store brought back to life with items stocked on shelves by category, ranging from hygiene products to food to pet supplies and more just ahead of the holidays.

“Such a wonderful thing came from such tragedy. Those folks have been through so much down there,” Durnil said. “There’s never a good time for heartache, but of all times, right before Christmas.”

The way people stepped up, regardless of the time of year, came as no surprise for Harding, who has seen it with other fundraisers.

The first side-by-side fundraiser was for the Eastern Greene football team, producing close to $1,000. Then a local family lost their daughter to cancer, and the group raised nearly $15,000.

“That was an eye-opener,” Harding said.

In the process, they found side-by-side vendors who began to contribute accessories for fundraising raffles, raising the ceiling for what could be accomplished.

“We realized, ‘We kind of have a platform now,’” Harding said, “so we try to do some good.”

They found plenty of help on a late December Saturday in Bloomington, confirming what Harding has always believed.

“That’s just the way this country is,” he said. “You look past anybody’s differences or shortcomings, and you come together when somebody needs help.”