What no one expected around 5 p.m. on October 12 was that the Hayden Substation in Jackson County was on fire.

A nearby farmer in his field saw the smoke and investigated, indeed finding a most unexpected fire.

“Occasionally a bird’s nest might catch on fire or there might be a little bit of arching, but no big infernos,” Jackson County REMC system engineer Shane King said. “We’ve had problems with the transmission lines feeding to it, but that substation has never been a problem.”

This problem was anything but normal.

“It was very, very unusual,” said substation specialist Ray Robinson, a 30-year veteran of Hoosier Energy. “Guys will go their whole career and not see a transformer and regulator burnt up like that, which is a good thing. This was quite surprising.”

Robinson could smell the burning oil well before he arrived as he drove across U.S. Route 50 east from Seymour.

With the flames flickering into the air and smoke billowing, there was little anyone could do initially other than let the fire department keep the blaze contained. With a thick wooded area on three sides of the substation and a corn field across the road, that was the initial priority.

“It was an oil fire, so there’s no way to put anything on it to put it out, so the best thing was to make sure it didn’t spread,” King said. 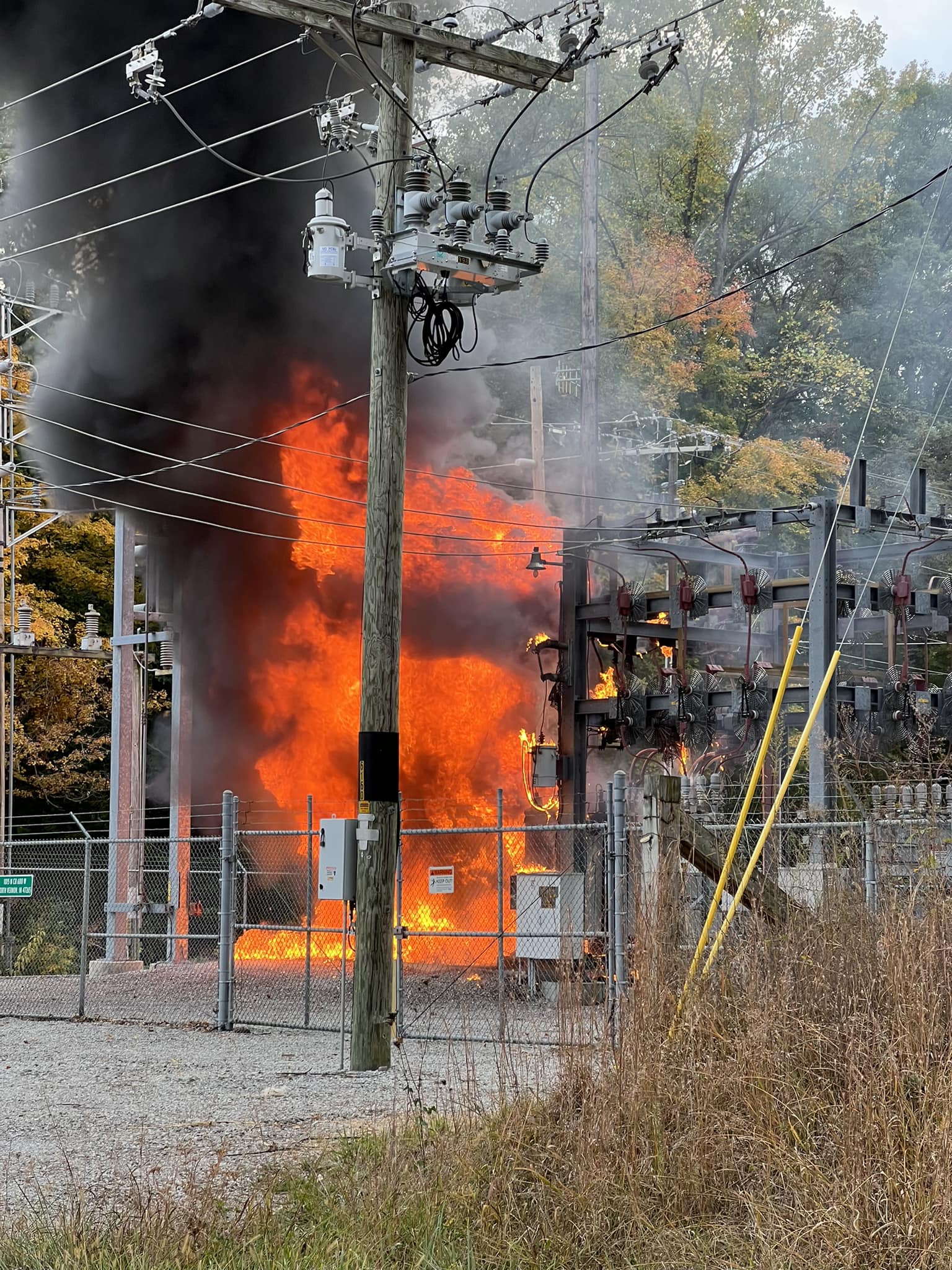 A fire blazes at the Hayden Substation in Jackson County. (Photo courtesy of Facebook/Rob Parker)

Once that mission was accomplished, the focus turned to getting power back on for the over 1,800 members impacted. Some initial switching got that done for half, but it would be four hours in all – around 9 p.m. that night – before everyone had power restored.

“Once it burned itself out, Hoosier Energy took over momentarily until Duke Energy opened some switches on the transmission lines into the sub, then Hoosier took over while we worked on restoration efforts,” King said. “We had to play it a little bit by ear, but the vast majority of it was a set plan for such an instance.”

“The REMC did a great job of getting everybody’s power back on,” Robinson said. “They switched it, and it went smooth, as smooth as I’ve ever seen it go.”

“I heard from people expecting the power to be out a week and couldn’t believe that a switching change could make a four-hour outage out of a catastrophic failure of a piece of equipment,” he said. “That surpassed all expectations.”

As to the extent of the damage and cause of the fire, that was a different matter.

“I just looked at the black everywhere and everything on fire and thought to myself, ‘What am I going to do with this?’” Robinson said. “There’s no way to know the cause. Even if it was an animal, the fire was so hot it was like a crematorium.”

Evidence suggested the issue was the B Phase on the high side of the transformer as the fuse was blown the skirts were blown off the high side bushings, but even that is only an educated guess.

“We’ll never know, because it was so burnt up,” Robinson said. “It was a very intense fire.”

A portable sub and mobile transformer helped fill the gap, but it would only take one week before the transformer, regulators and associated connections were replaced, ash and soot was cleaned, the substation rebuilt and energized back to full capacity once again.

Many expected that would take a month or more, but with three transformers having just arrived at the warehouse, all the materials were on hand as were plenty of helping hands. 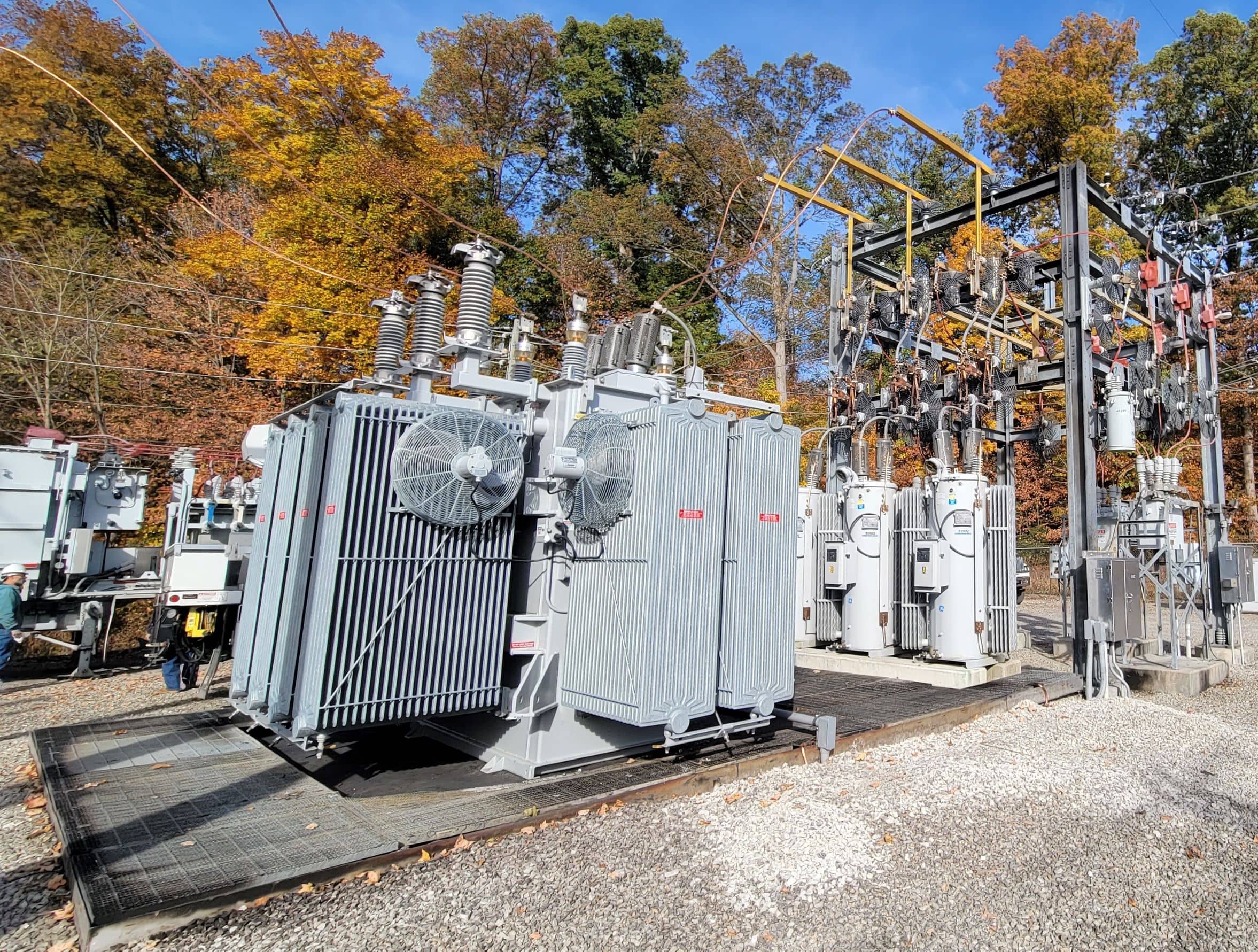 After a lot of cleaning and replacement parts, including a new transformer, the Hayden Substation shows no signs of a fire. (Hoosier Energy photo)

“We had Hoosier Energy guys come in from all over – English, Napoleon, even Worthington,” Robinson said. “Give them all the credit. They really busted their butts. We had it back up like nothing happened in a week, and it was a nasty, dirty job. It made you proud to see how hard these guys worked.

“It was impressive for what we had to do, from running new cables to changing out the switches, not to mention all the cleaning because everything was black. There was a lot of scrubbing, and people were covered in soot. I’ve still got some on my hard hat I can’t get off.”

“Being out there on site, I was impressed with how the Hoosier Energy folks analyzed the situation and had a plan for getting it restored,” he said. “They were throwing out within a week to get the substation back up – no way, I thought.