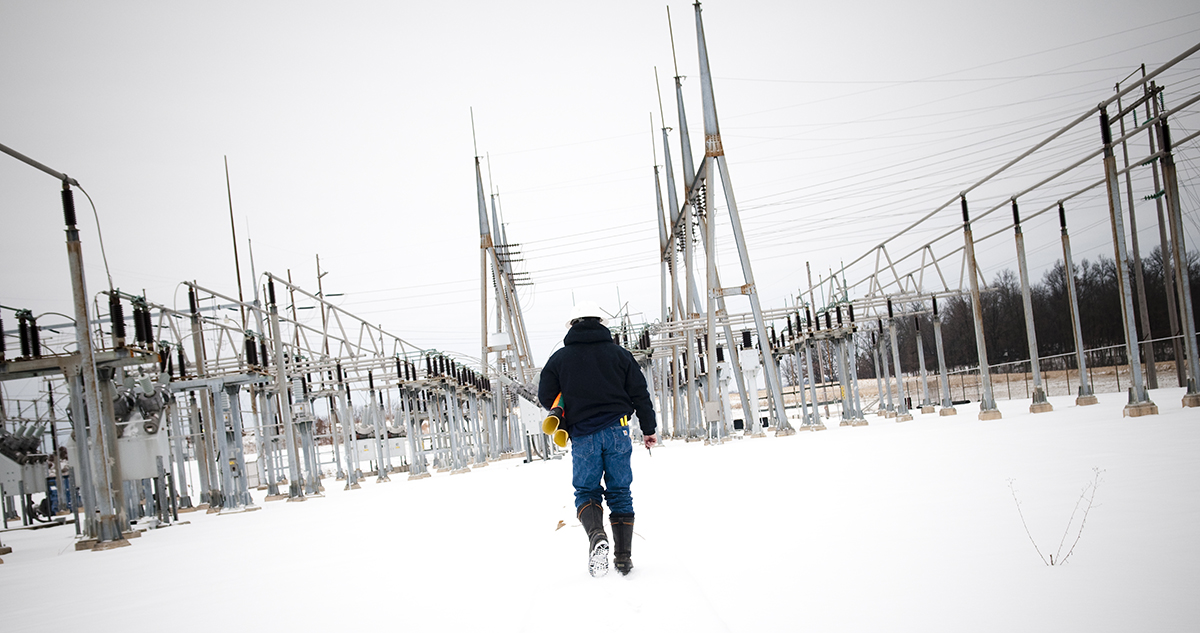 Stories from the Front Lines

From overcoming winter weather to utilizing new technology, Hoosier Energy employees give their all to maintain grid resiliency

In his 27 years at Hoosier Energy, Line Foreman Mark Richardson has trekked countless hours across the hills and hollers of southern Indiana and Illinois to find downed power lines. Each winter storm comes with its own challenges complicated by cold temperatures and excessive snowfall.

Richardson recalls a rough snowstorm several years ago, when he and another line worker embarked on foot to find the cause of an outage.

“The snow was probably 10 inches to a foot deep, and we were climbing uphill, downhill – I think I spent more time on my hands and knees than on my feet,” he says. “We walked for probably three or four hours straight, and the snow was blowing so hard. It was dark, and you’d shine the flashlight up and couldn’t even see the line half the time.”

Richardson explains that miles stretch between road crossings, which means line workers often have to hike – regardless of the terrain or weather conditions – to find and fix downed lines. “You just have to fight through it and keep going,” he says.

At about daylight, Richardson and a coworker found the culprit power line. “It’s just one of those all-nighters that you don’t expect to happen, but usually does.”

Frank Schmidt, Line Foreman at Napoleon, has had similar experiences in his 36 years working at Hoosier Energy. “We’ve had storms where we’ve walked through waist-high snow,” he recalls, adding that many of those trips involved hiking several miles to locate lines taken out by fallen trees. During one storm in Orange County, he found himself in a precarious situation. “The pine trees were so loaded down with snow that they just started breaking over. You just heard stuff popping and cracking, and pine trees started falling down around you everywhere,” he explains.

Even though tornadoes leave destruction in their paths, Schmidt says they don’t normally produce as much damage as ice does. “Tornadoes don’t take out miles and miles of line like ice does,” he says. “Ice just takes so much down – not just lines, but arms, and once that starts falling, with all that weight, it just keeps going. Ice is the worst.”

One of the most unique sights Schmidt ever saw was at a substation in the mid-1980s. He walked up to the fence with his safety glasses on and saw electricity tracking along the ice coating the fence.

Richardson says he’s learned to watch the radar for incoming weather, especially after a tornado went through Crossville, Ill., a few years ago, and downed 32 poles.

“The weather just really plays havoc a lot, especially wintertime – winter and spring are the worst,” he says. “When it gets cold and ice gets on the power lines, the wire can move up and down if it’s windy. The ice can break a pole if too much gets on the wire. The poles can’t handle the weight.”

When the Blizzard of 1978 happened, Substation Foreman Joe Crowe had only been with Hoosier Energy a few years. He had just bought a four-wheel-drive truck when the storm dumped about 20 inches of snow on southern Indiana and Illinois, and winds up to 50 miles per hour pushed snow drifts as high as 25 feet.

“About three of us made it to the Hoosier Energy office – just making it to the office and shoveling out the snow was about all we could do the first couple of days,” says Crowe. While the city and county hired big front loaders to dig out a lot of places where it drifted deep, snow at the office drifted as high as the storage and equipment buildings.

“The stuff that really gets us is the ice,” Crowe adds. “Ice gets on equipment at the substation, but I haven’t seen it mess things up like it does on the power lines.”

Crowe explains that the equipment at substations is designed to be out in the weather year-round, so inclement weather doesn’t impact it as drastically as power lines. “Some days, it’s awful cold, and you can hardly bear it, but you stand it as long as you can, and then warm up for a bit, and get back out there.”

“We’re pretty much prepared for winter all the time, because we’ve got to be,” says Crowe, explaining that crews prepare their four-wheel-drive trucks for winter by putting in diesel additives and make sure all equipment batteries are sufficient.

Being prepared for any weather circumstance or disaster involves having cutting-edge technology and equipment that facilitate and maintain grid resiliency. Hoosier Energy provides line workers with all-terrain vehicles and track machines – digger and bucket trucks on tracks that resemble a tank – to make it easier to travel across hazardous properties to find line breaks.

“We can get in and out to places we should not be able to,” says Schmidt.

Richardson says that new drone certifications and equipment means he doesn’t have to climb a pole to inspect woodpecker holes, which may require replacements.

“You can’t really tell how deep they are, so the drone is really nice because the pilot can get right on it and tell me what I need to know,” says Richardson.

Chris Ware, Manager of Power Delivery Engineering, says drones can be used to fly into areas that may be difficult to access. “Pilots could deploy a drone and get eyes farther than they can see.”

Another useful technology is the geographic information system (GIS) utilized to track assets, easement rights and land rights for facilities, whether that’s transmission lines or a warranty deed for property with a substation or generating facility. The GIS works in conjunction with an app to help with spring and fall aerial patrols. The spring patrols help prepare for summer by targeting areas that need vegetation removed.

“Our fall patrols are there to make sure that the vegetation management coordinator can find anything problematic before the winter,” Ware says. “They can assess those lines and make sure we don’t have any trees that might be hard to get to, especially during winter storms, when snow on the ground makes it harder to get to the site.”

Instead of guessing locations and manually writing down information in notebooks while flying over, the coordinator can simply hit a button on the app and make notes about the situation.

“Following the flight, the coordinator is able to go back into the app, pull up all areas he pinpointed, and categorize those to get the right maintenance efforts to clear those prior to wintertime,” Ware explains. “This has been a tremendous help and value for the future.”

Ware adds that Hoosier Energy uses digital fault recorders that will pinpoint the location of a fault, so if a tree came down on a line or if a span of line had a fault for any reason, the flaw can be identified and isolated to restore load.

“That’s a system we’ve had in place since the 1980s, and we’ve constantly improved and replaced components on it,” he says. “We were advanced by quite a few years from our neighboring utilities that have just started putting that technology to use in the past five years.”

Ware says he has been with Hoosier Energy for 21 years, and technology has come a long way in that time.

“Hoosier Energy has and will continue to look at newer technology to enable us to minimize outage duration or to eliminate the causes of outages. It’s more and more important as the grid evolves and becomes different than it used to be,” Ware says.