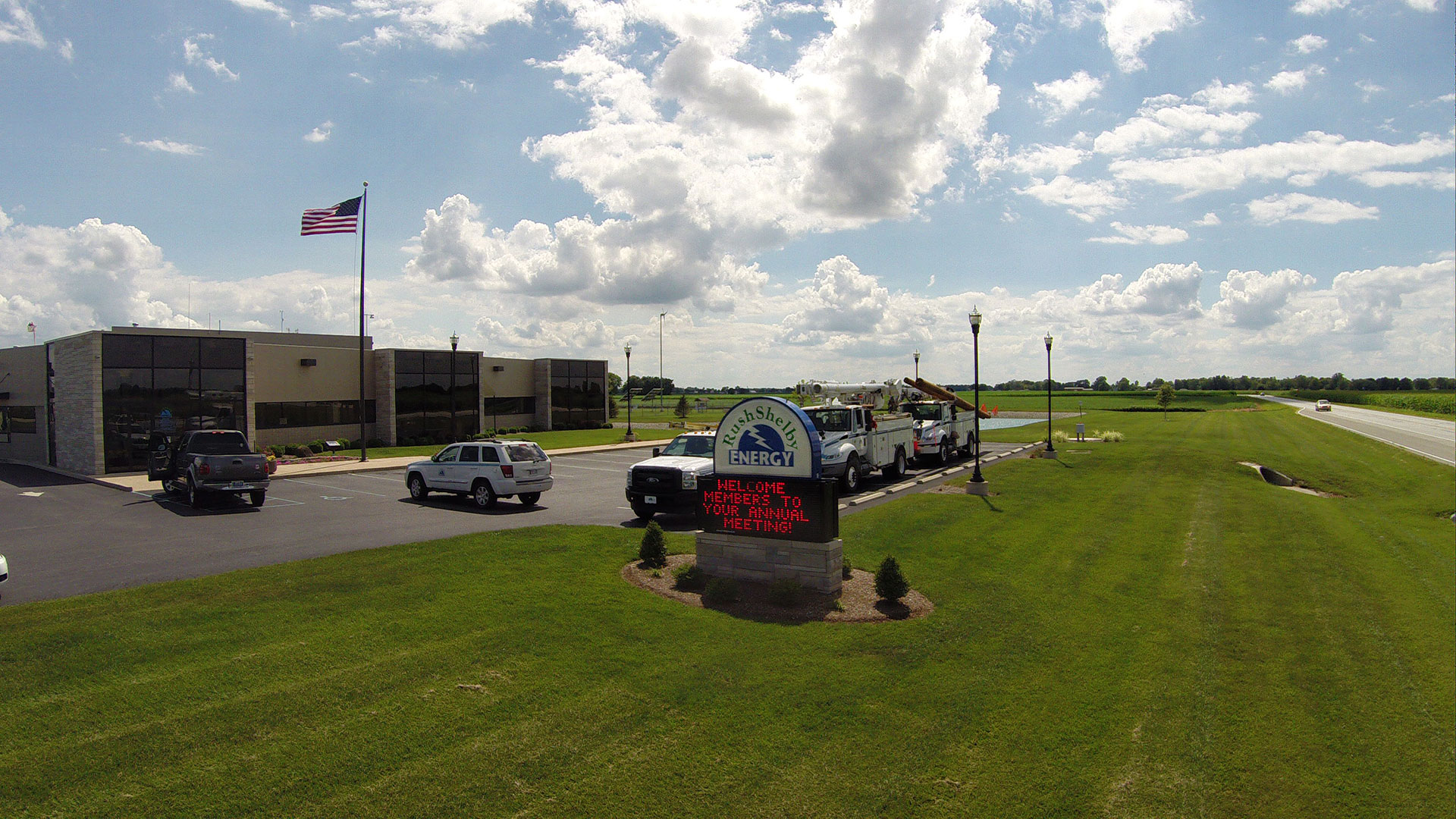 Planning ahead puts RushShelby Energy in position to maintain success

It wasn’t so much a matter of seeing the future as knowing history suggested tough times would come again.

When Terry Jobe took over as CEO of RushShelby Energy in 2010, the Hoosier Energy member system was ill-prepared for potential difficulties.

Equity was at an all-time low and debt was high. The Great Recession from late 2007 to mid-2009 was a contributing factor, along with some investments that failed to pay off.

Something had to give.

Just over 10 years earlier, Rush and Shelby County REMCs merged to create RushShelby Energy in 1999. At the time the co-ops combined, equity was approximately 60 percent.

But the first decade of the new century would not be kind to the partnership, which included building a new headquarters that opened in 2008.

When Jobe assumed responsibility two years later, equity was down to 29%, lowest in the state of Indiana. Concerned bankers were watching, and they wanted a plan.

Jobe had one that he already presented to the board of directors.

“I told them the night they walked me into the board room (to interview) that I had a plan,” Jobe said. “It was a three- to five-year plan, just give me the first year to line things up.”

Six months in, a once in 25 years ice storm made for a brief setback, but Jobe stuck to the plan.

“It was a thousand little things that aren’t exciting at all,” Jobe said. “It doesn’t show up in the box score who laid down a bunt.”

Continuing the baseball analogy, it was just singles and doubles, no home runs.

Work plans went from multiple projects in multiple years to one-year plans with definitive results. The company also fine-tuned its subsidiaries, including the sale of a local radio station. At the time of the original purchase, it kept the station in business, preserving a key part of the community. However, times were changing.

“We changed our attitude and changed the way we operated,” said David Toll, who served as Vice President of Consumer Services and Vice President of Administration at RushShelby under Jobe. “We paid cash more, didn’t borrow as much, changed our work plans and just made things last a little longer until we could get a new truck or new tools or whatever.

“We didn’t skimp on the lines and our system, because it was important to keep those up.”

RushShelby still borrowed money but took advantage of low interest rates and always paid back the loan by the end of the fiscal year, not allowing debt to grow. Toll compared it to a paycheck loan.

“As revenues increased, then we didn’t have to borrow,” Jobe said. “We were still able to run our business. We didn’t do without, and we had nice things. We weren’t cheap, but we couldn’t spend without consciousness.”

As a matter of fact, RushShelby invested nearly $35 million during Jobe’s tenure in plant – fixing lines and poles and transformers, upgrading the system – all without adding additional debt.

The co-op also began paying back capital credits using two programs, allowing it to teach both old and new members about the cooperative way.

“That was important,” Jobe said. “If you’ve got losses, you can’t give back credits.”

Jobe’s original goal was to get things headed in the right direction for his successor. In that regard, he overachieved.

By the time Jobe retired at the end of 2021, equity was at nearly 47% and RushShelby had made a profit for 10 years running.

“Did it surprise me? It kind of did,” Jobe said. “We saw what keeping your nose clean and not overreaching could do. After 11-12 years, looking at statistics, it’s very surprising where we were. When I retired, we were in a strong financial position. We could take a hit from a major storm or an economic downturn.”

Jobe insists it was a group effort, incorporating employees, staff and a strong board of directors with little turnover.

“The board gave me leeway and trusted me – they didn’t micromanage,” Jobe said. “It was a we thing as we kept going and had success. If it was a different co-op with a different board, I don’t know if we could have turned it around so quickly.”

That team mindset translated into other areas as well.

“One thing we did well that I attribute to staff and planning is we created really good budgets,” he said. “We were very accurate because we spent time at it and didn’t guess much. When we did guess, we usually guessed right.

“We had a plan and I knew as a CEO what I wanted to do, but having a strong staff helped the buy-in, and we went down the road together.”

The first six months have been a bumpy ride for Chastain in a volatile economy and ever-changing energy industry, but it’s a ride that doesn’t have him worried.

“If this would’ve hit 10 years ago, we would’ve been scrambling to figure out how to build equity plus not pass it all along to the membership,” he said. “… We are not in a panic phase. We can step back and absorb and analyze different options and figure out a solution. Sometimes the solution is not the greatest but what we’re trying to do is make decisions today that won’t adversely affect us in the future.”

Chastain’s first job in the cooperative world was as a groundman at Rush County REMC during his college summers from 1994-96 with Jobe as his boss. Add in the past 15 years working under Jobe, and Chastain is eager to build on what has been established.

Getting RushShelby prepared for the future was one of Jobe’s best ideas, even if he didn’t have a crystal ball.

“I can’t say I saw it coming, I just knew interest rates couldn’t stay low forever, so we had to have solid financial footing,” Jobe said.

The decision has paid off.

“I believe people are put in place at the right time, and Terry was definitely the mind we needed to help us get out of our equity lows,” Chastain said. “I can’t imagine anybody else would’ve been able to drive us in that direction.

“If anybody is ever in the right place at the right time, he was for this organization.”