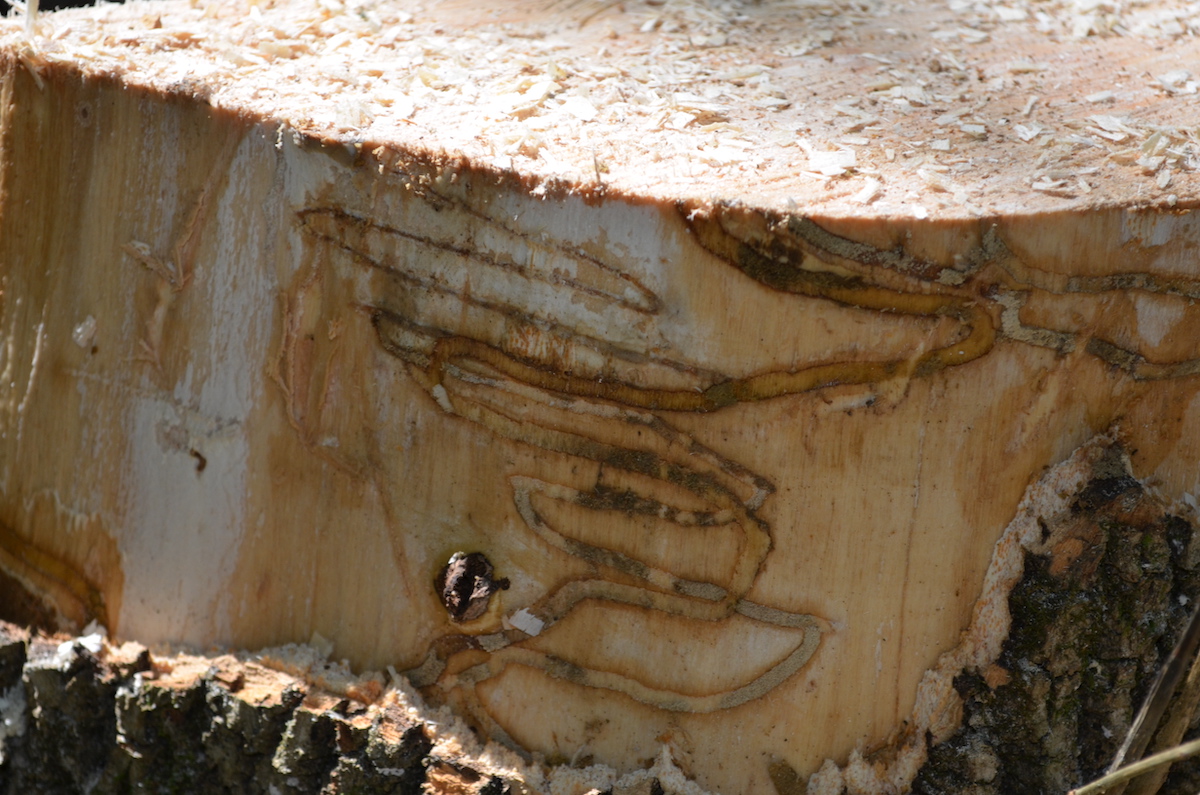 Twice every year, Jared Murphy climbs into a helicopter to patrol miles and miles of transmission rights-of-way that crisscross southern Indiana and southeastern Illinois.

As Vegetation Management Coordinator, Murphy is looking for dead trees, overgrown brush or any other vegetation growth threatening to interfere with power lines along Hoosier Energy’s nearly 1,700-mile transmission network.

Targeting dangerous trees before the dead hulks topple into power lines and potentially cause an outage or worse, a fire, is a big part of the vegetation management program at Hoosier Energy.

In 2016, about 900 clusters of dead trees were threatening power lines on the grid. The largest majority were ash. It was clear that the Emerald Ash Borer had hit the area. This wood-boring beetle native to Asia first surfaced in Michigan in 2002. Two years later it had moved into Indiana and has continued a steady destructive march throughout 30 states since, killing millions of ash trees in its wake.

Hoosier Energy took swift action, and today, the light at the end of the tunnel to mitigate damage from the tiny beetle can be seen. During the past five years, the ways to combat the beetle have evolved and the process in place today begins with technology.

With more than 147 million ash trees in Indiana and about 25,000 or so in or near utility rights-of-ways, Murphy knew the speed of removing affected trees needed to increase.

“I called everyone I knew to find out what they were doing. Some had success with large four-foot aerial saws to cut vegetation away from rights-of-ways so I looked into this and liked what I had learned,” said Murphy.

Carried by a helicopter, the four-foot saw is lowered into the tree canopy to cut affected trees. Up to 200 trees can be cut in a day.

This single change helped reduce the time needed to remove targeted trees in Hoosier Energy rights-of-way from a year to just a few weeks. This has reduced the cost of treating affected ash trees by 60 percent.

As Murphy takes to the skies in a helicopter, he uses software from surveying and engineering firm Bledsoe Riggert Cooper James that connects problem areas with GPS coordinates. This data is what crews using the aerial saw review to target problem areas.

What the saw leaves behind is a trunk that is short enough that if it did fall, it would not affect utility equipment. When the trunk remains, there are habitat benefits as well.

“The remaining tree trunks can be used by wildlife that require dead or hollow trees for shelter,” said Murphy.

The process to remove dead trees in a timely, cost-effective way, consistent with state and federal regulations, is ongoing. The ash borer has affected Hoosier Energy and nearly every member system with those on the eastern side of Indiana hit the hardest.

“Our plan to mitigate the emerald ash borer is working well as we comply with NERC-regulated lines and bulk power system lines,” said Murphy.