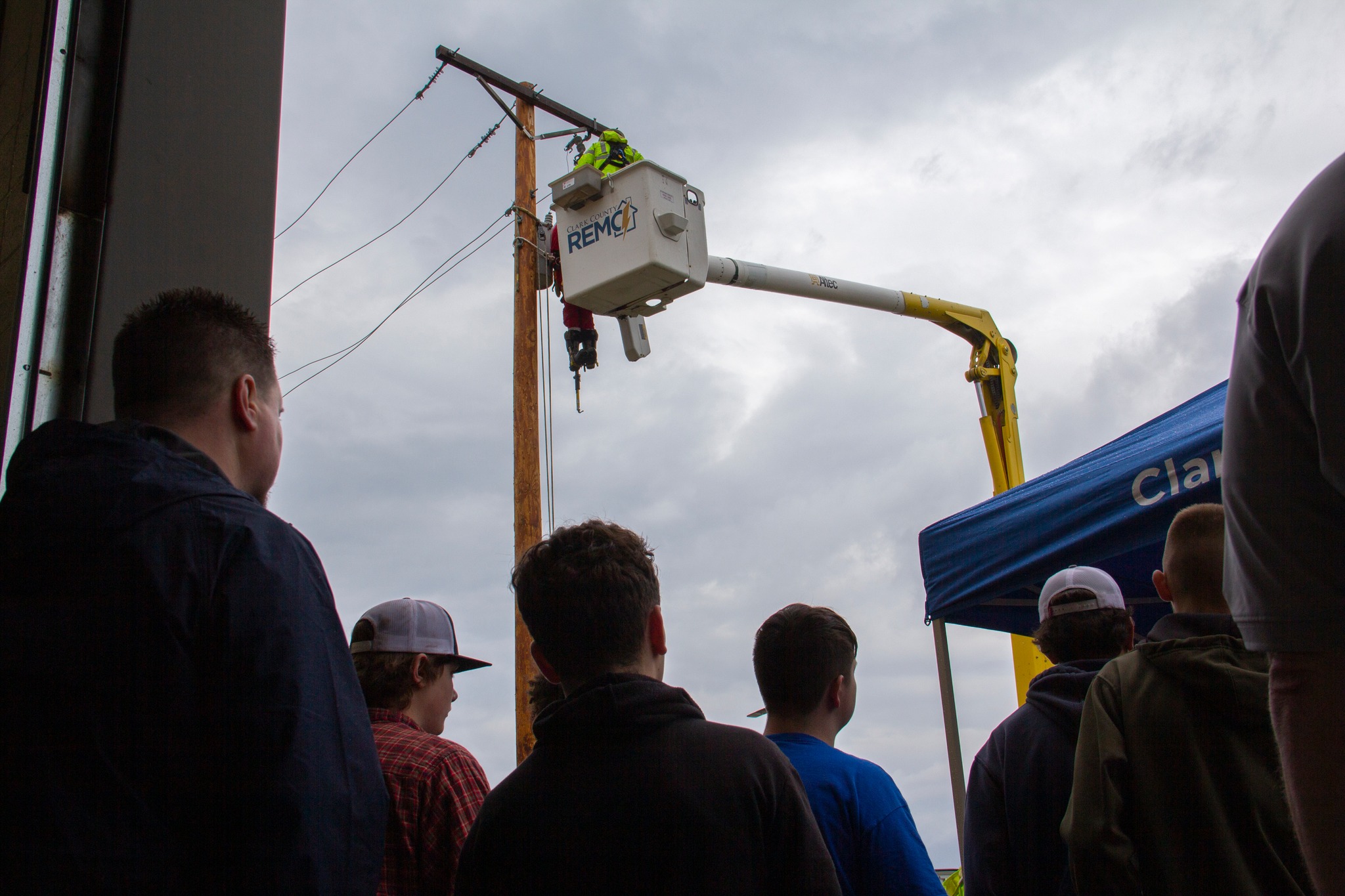 The seed was planted two and a half years ago.

This May, what was planted finally got to bloom.

Clark County REMC and Charlestown High School have combined to give students not only a classroom view of the generation and transmission of electricity but practical, hands-on experience.

The 2021-22 school year was capped by presentations of alternative energy sources.

“This year the students read “The Boy Who Harnessed the Wind,” about a boy who takes garbage from his village and creates a windmill, so we thought the lesson should be alternative energy sources,” said Charlie Nattrass, Charlestown Academy Coach.

Alternatives have been the name of the game since the initial partnership launched in January of 2020.

It all began when Clark County REMC was approached in the summer of 2019 by Direct Employers Institute, whose mission is to connect students with business leaders in order to provide real-world experience. There was already an existing relationship with the Indiana University School of Education.

The engineering academy is where the REMC partnership lands, and during that initial semester in 2020, students were engineering how to get electricity to remote villages in Guatemala. It mirrored the real world.

“We decided to model Project Indiana (a project by state electric cooperatives since 2012 to provide electricity for Guatemalan villages),” Clark County REMC manager marketing and member services Brian Omerso said. “So we gave students the task of figuring out what an underserved village in Guatemala needed to bring electricity and how to do that – power source, lay out the lines, load with both engineering and technical tasks.”

A core of six REMC employees were in the school every Thursday and prior to spring break 2020, the class presented what it had learned so far with plans to come back and finish out the semester with model villages on display as the final project.

“When you do project-based learning instead of bookwork or YouTube videos, it makes the job more real,” Nattrass said. “Another part of it is that students are forced to work in groups. We had a group of students who were in geometry draw to scale the Guatemalan village and where a pond was, where the road was, where lights would go in the hut, where power lines would be run and engineering had to build it.

“Students had to talk, argue, compromise back and forth, and they realize they have to depend on each other’s work ethic to meet deadlines.”

COVID intervened and those final projects never quite got to the finish line.

Fast forward some 18 months and plans began to take shape for relaunching the program on a slightly smaller scale. This time, Clark County REMC partnered with Purdue Polytechnic New Albany for the Charlestown classes.

“We had a great relationship with Charlestown and the students, but nothing happened until the fall of 2021,” Omerso said. “Then we finally talked about getting together again.”

This time, students have had a lineman as a guest speaker, made a field trip to the REMC office and solar panel field, took a field trip to Purdue Polytechnic and had Hoosier Energy’s Jennifer Richardson visit to talk about ESG (Environment, Social, Governance) and how that might impact their alternative energy sources, which ranged from wind to solar to hydro to nuclear to ocean waves.

Despite sub-par weather, the Clark County REMC field trip was a success.

“A lot of the students were surprised by how many career options there are at an electric company,” Omerso said. “Even though the weather was awful, we went to the solar field and saw wet, dreary solar panels, did a pole-top rescue and showed how bucket trucks worked, did a live-line demonstration, showed them a remote connect meter and then gave everybody T-shirts and water bottles. We had a good time with it, and for many of the kids it was their first field trip in a while. One said it was his first field trip in five years.”

Even if it’s not via a field trip, Clark County has made an impression.

“Working with REMC people every week made them take this more seriously,” Nattrass said. “The REMC wouldn’t say, ‘That won’t work,’ but they watched students work through the failure process – ‘Why didn’t that work?’ and ‘Let’s try it again.’”

“The REMC has taught us about electricity, how it works, how it’s stored, how much we use, how much we waste and, of course, with the help of the REMC and co-ops in general, how energy even made it to rural Indiana.”

That education is as valuable as any.

“I’ve always grown up with a cooperative,” said Nattrass, a native of Austin, Indiana. “But a lot of the students don’t even know who they pay their electricity bill to. I still don’t know if they understand how a co-op works and how important that is. They probably won’t until they build their own houses and have to bring electricity to the property.

“One class, we talked about electric cars and lithium batteries, considering the impact and the possibilities. Students are learning to think realistically and with integrity, understanding dependence on the grid. … They can have intelligent conversations in the future and even think about how they might vote.”

The school isn’t the only one who sees a net positive.

“We see a lot of good coming out of it,” Omerso said. “If nothing else, when those kids see REMC, they think more than, ‘Just pay your bill.’ A lot of them aren’t REMC members, some are Duke customers, but at least they have that association that the REMC invested in them and showed up, so in the future they’ll show up for us.”